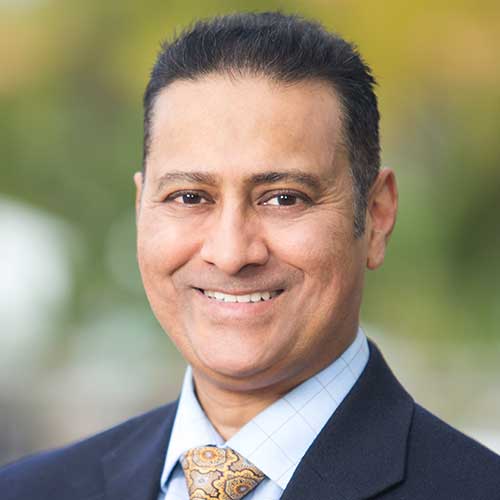 Sanjaya Saxena, MD, is a board-certified psychiatrist who provides care as an adult psychiatrist at Rogers Behavioral Health in San Diego. Dr. Saxena is also a Clinical professor, University of California, San Diego Department of Psychiatry.

Dr. Saxena received his Bachelor of Arts from Swarthmore College in Pennsylvania. He earned his medical degree from the University of Minnesota Medical School. He completed his residency in psychiatry with the University of California, Los Angeles Neuropsychiatric Institute, where he also completed his neuroimaging research fellowship with the Department of Molecular and Medical Pharmacology.

Dr. Saxena has been elected into Best Doctors in America every year since 2005 and into Castle Connelly’s and US News & World Report’s America’s Top Doctors every year since 2008. He serves on the Scientific Advisory Board for the International OCD Foundation and was an advisor to the DSM-5 Workgroup on Obsessive-Compulsive and Related Disorders. He and his colleagues developed the diagnostic criteria for Hoarding Disorder, which is now listed as a separate diagnosis in DSM-5. Dr. Saxena has been heavily involved in teaching psychiatric residents and medical students. In 2007, he won the UCSD Department of Psychiatry Faculty Teaching Award. He is also active in community education, giving many presentations for local, national, and international medical and mental health groups. Dr. Saxena also served as the psychiatric consultant for the motion picture, ‚ÄúAs Good as It Gets‚Äù (Sony Pictures, 1997), in which the lead character, played by Jack Nicholson, suffered from OCD.

Dr. Saxena’s research focuses on the neurobiology and treatment of OCD, hoarding disorder, and related disorders. He and his research team use functional brain imaging to understand the brain circuits and systems that mediate OCD and hoarding symptoms, to reveal how effective treatments work in the brain, and to predict response to various types of treatments. He has authored or co-authored over 80 scientific articles and book chapters and has presented his work at many major national and international scientific meetings. He has received awards and grants from the American Psychiatric Association, American Neuropsychiatric Association, International OCD Foundation, and the National Institute of Mental Health. His research has garnered attention from local and national media, and he has been featured on ABC, CNN, Larry King Live, MSNBC, Fox News, the Discovery Channel, National Public Radio, BBC News, the New York Times, Boston Globe, USA Today, Washington Times, Los Angeles Times, San Diego Union-Tribune, Dallas Morning News, Time Magazine, Discover Magazine, Reader's Digest, and various local TV news programs.